Ringing the Bell in Celebration of Women's Rights to Vote 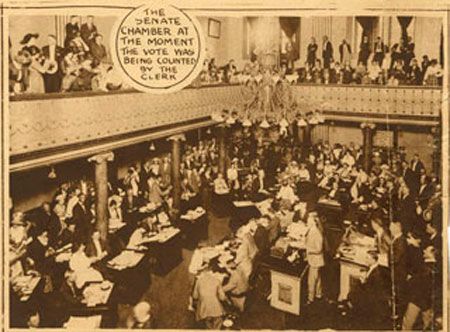 The Milestones yearbook of 1920 begins with a special foreword — a letter of sorts to the entire Ward-Belmont School community. An excerpt reads:

"[I]n this glorious year of 1920 she finds herself free, at last, to express her aspirations in the ways that will make for the uplift of humanity. This golden year sees her with the power in her hands. . . . It finds her with the vote, heartened by the respect and confidence of the world. . . ."

Today, we ring the bells to celebrate the 100th anniversary of the 19th Amendment, which gave women the right to vote. But the passage of the amendment in 1920 was anything but certain.

As Tennessee lawmakers gathered that sweltering summer, more than a year had passed since the United States Congress first voted to approve the amendment. Thirty five of the 36 states needed for ratification came forward in favor, but then the momentum slowed.

Many Southern states rejected the amendment or chose not to consider it. With tension mounting and only one more state needed to reach the clinching majority, the eyes of the nation focused on Nashville and the Tennessee legislature.

Would the state cast the decisive vote to ratify the 19th Amendment?

It was a war of words. It was also a war of roses. Walking along the city streets that scorching August in 1920, men and women wore the flowers to signal their support or opposition: Yellow for those who wanted to ratify the federal amendment and red for those who disapproved.

For the suffragists, voting was a righteous cause about justice, the protection of family, and civic duty. For opponents, known as "the Antis," it was about the need to preserve a Southern way of life, which was based in large part on strict racial segregation.

As Nashville garnered national attention, several women and men connected to Harpeth Hall's predecessor schools (Ward Seminary and Ward-Belmont) were directly involved in the fight for women's suffrage. Most notably, Anne Dallas Dudley who was the vice president of the National American Woman Suffrage Association (NAWSA). Dudley led suffrage parades, gave speeches, and made the compelling case that access to the voting box would strengthen, not threaten, women's roles in the home. "Men bear arms, women bear armies," she once quipped.

Dudley is one of the most heralded changemakers, but the efforts came from a collective of impassioned women. Harpeth Hall is proud that so many members of our predecessor school communities also participated in the movement. We celebrate these women:

Of course, there were many others in Tennessee and across the nation who came to Nashville that summer. On August 18, 1920, after a series of delays and maneuvers to table the bill, the House began the roll-call vote on the amendment. Inside the House chamber, women and reporters filled the galleries, but in counting the yellow flowers worn by the lawmakers, the suffragists realized that they did not have enough votes to win. There appeared to be 48 yellow roses and 48 red roses. A tie vote meant a defeat. The suspense was broken, with a dramatic and courageous vote by Harry T. Burn, a representative from Niota, a small town in East Tennessee. Burn, who was wearing a red rose, literally rose to his feet—and to the surprise of everyone in the gallery—voted "yes" in favor of ratification.

Chaos ensued but when the final vote was tallied, ratification had passed by the final vote of 50 to 46. Tennessee became the 36th state to ratify the amendment. The next day, when reporters interviewed Harry Burn, he showed them a letter from his mother who asked him to support suffrage. Closing words to her son were: "Do the right thing." He had decided after reading her letter, that he would support suffrage if the vote was close.

A week after the momentous vote, Governor Roberts signed the certificate of ratification on August 24. Carrie Chapman Catt delivered the certificate to Washington D.C. to Secretary of State Bainbridge Colby, who declared that the 19th Amendment was ratified on August 26. Now, August 26 is celebrated as Women's Equality Day.

The year 1920 settled the question for white women, but the disenfranchisement of African American women and men continued under Jim Crow laws across the South. Guaranteeing the right to vote for African Americans would require another grassroots campaign — the Civil Rights movement of the 1960s. Nashville once again played a major role in the fight for equality as local African American students, including the late John Lewis, conducted a Sit-In campaign to desegregate lunch counters.

The Milestones yearbook of 1920 contained one other extraordinary section: the dedication. Rather than dedicating their annual to an administrator or faculty member, the honor was conferred on all students and alumnae. The student staff wrote: "We the girls of Ward-Belmont are fortunate [to] be a part of the great world movement of women. We have heard its call. . . . we also dedicate in this book our talents, . . . our joys and our aspirations." Well and simply said. Like their foremothers, Harpeth Hall students and alumnae are, without a doubt, active participants in today's world movement of women.

For the full suffrage story, take Dr. Carole Bucy's tour on Nashville Sites: https://nashvillesites.org/tours/womans-suffrage/. The tour is free with audio narration, historic images, and can be taken virtually or in-person on any device.