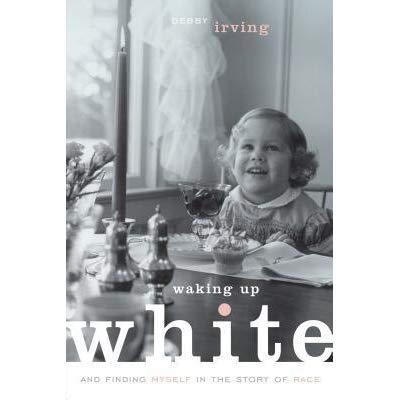 On Friday, January 17, Harpeth Hall celebrated Dr. Martin Luther King, Jr. in an all-school assembly that included a special speaker. Debby Irving, author of Waking Up White, and Finding Myself in the Story of Race, talked with students about white privilege and offered fresh perspective on bias, stereotypes, belief systems, optimism, and tolerance.

As a racial justice educator and public speaker, and also as a community organizer and classroom teacher for 25 years, Debby Irving "grappled with racial injustice without understanding racism as a systemic issue or her own whiteness as an obstacle to it," according to her book.

Irving arrived at Harpeth Hall on Thursday, January 16, and spent time in a group discussion with faculty members. She also spoke at a well-attended parent/community event in the Frances Bond Davis Theatre that evening. Her presentation was titled, "I'm a Good Person, Isn't That Enough?" [also the title of her presentation to students on Friday.] 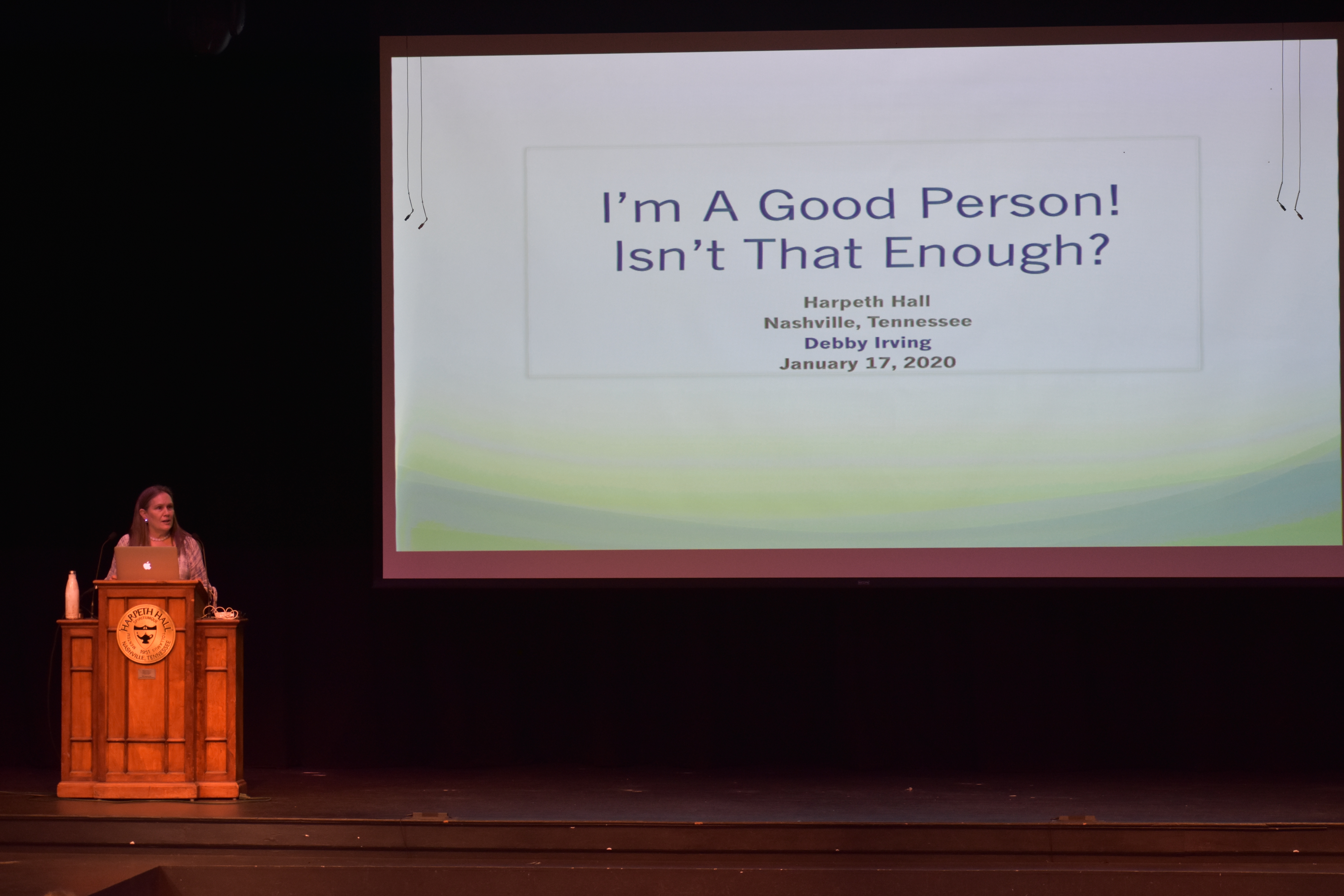 Using historical and media images, Irving unpacked her own long-held beliefs about colorblindness, being a good person, and wanting to help people of color. She explained how each of these well-intentioned mindsets actually perpetuated her ill-conceived ideas about race, and she also discussed how she naturally used her white-skewed belief system to interpret the world around her.

Irving explained her background to the girls and how her personal belief system was created when she was very young. "Our belief systems are built by what we see, by what we are taught and what we learn, and also by what we DON'T see and learn. That is an important piece." Irving engaged the students to talk about what they saw in the images she shared and what they knew about several historical figures, including Rosa Parks. She provided information on Parks' background, education and training as an activist that some students did not know. She also talked about the inequity in how the G.I. Bill was distributed and the lasting effects on society today.

Irving wrote her first book Waking Up White in 2014. She now speaks to groups and organizations and leads workshops around the country. Irving devotes herself to "exploring the impact white skin can have on perception, problem solving, and creating culturally inclusive communities."

Debby Irving grew up in Winchester, Massachusetts, in a predominantly white, upper middle class community in the 1960s. For much of her life she had not given much thought to race, even though she had encountered racial tensions in professional and social situations.

When she was in her 40s in 2009, Irving took a graduate school course in "Race and Cultural Identity" and began to comprehend how much she had benefited over the years because she was white. "I see what I am spared day-in and day-out, and I am focused on how easy it is for me to just wake up and go about in a world that was constructed for me," Irving said.

A graduate of the Winsor School in Boston, she holds a BA from Kenyon College and an MBA from Simmons College. Her first book, Waking Up White, tells the story of how she went from well-meaning to well-doing.

Not so long ago, if someone had called me a racist, I would have kicked and screamed in protest. "But I'm a good person!" I would have insisted. "I don't see color! I don't have a racist bone in my body!" I would have felt insulted and misunderstood and stomped off to lick my wounds. That's because I thought being a racist meant not liking people of color or being a name-calling bigot.

For years I struggled silently to understand race and racism. I had no way to make sense of debates in the media about whether the white guy was "being a racist" or the black guy was "playing the race card." I wanted close friends of color but kept ending up with white people as my closest friends. When I was with a person of color, I felt an inexplicable tension and a fear that I might say or do something offensive or embarrassing. When white people made blatantly racist jokes or remarks, I felt upset but had no idea what to do or say. I didn't understand why, if laws supporting slavery, segregation, and discrimination had been abolished, lifestyles still looked so different across color lines. Most confusing were unwanted racist thoughts that made me feel like a jerk. I felt too embarrassed to admit any of this, which prevented me from going in search of answers.

In Waking Up White, and Finding Myself in the Story of Race, Irving shares her on-going journey in search of these answers and in search of better awareness. We are very grateful to Ms. Irving for visiting Nashville and Harpeth Hall and engaging with our community in such a meaningful way. Learn more: https://debbyirving.com/the-book/ 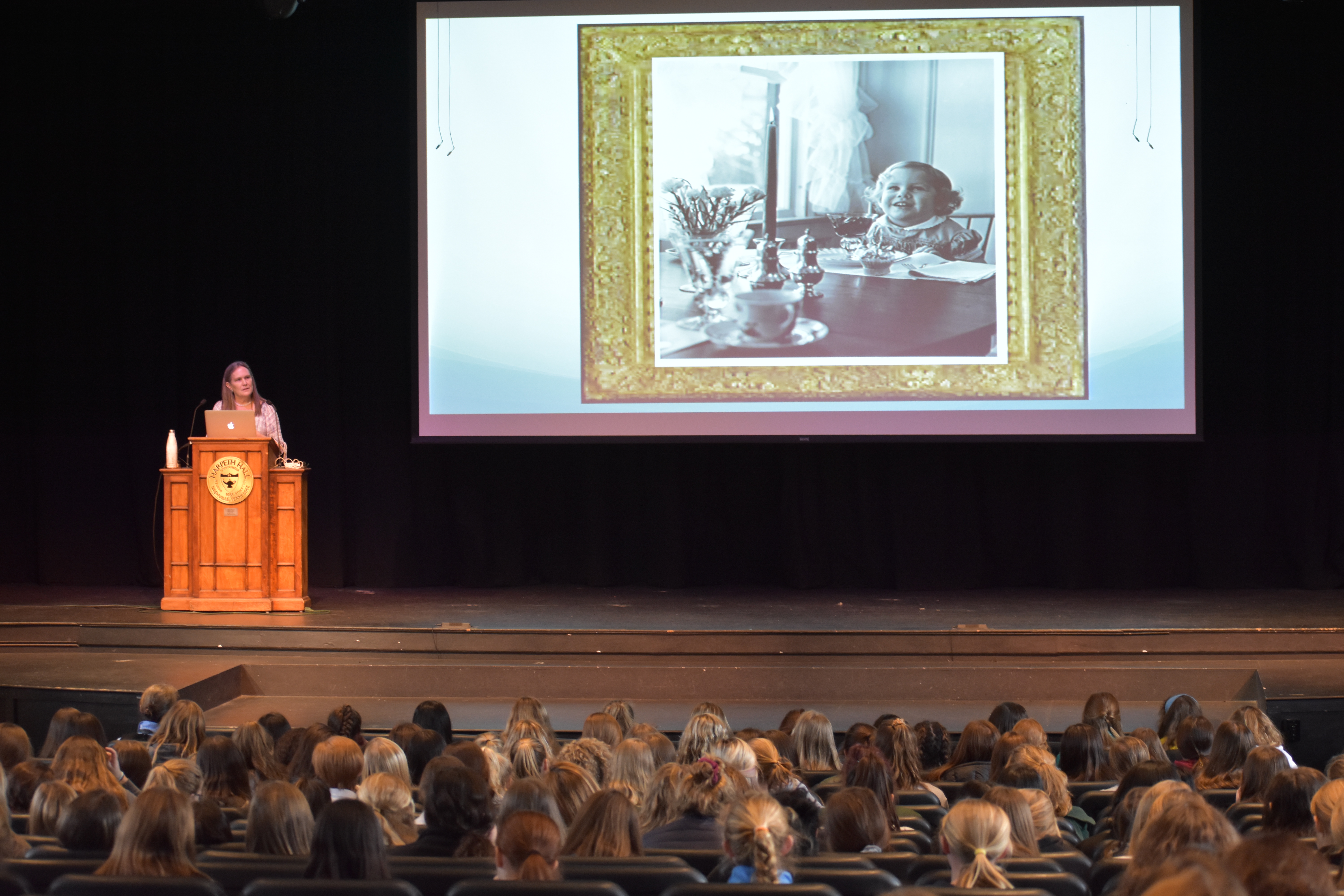 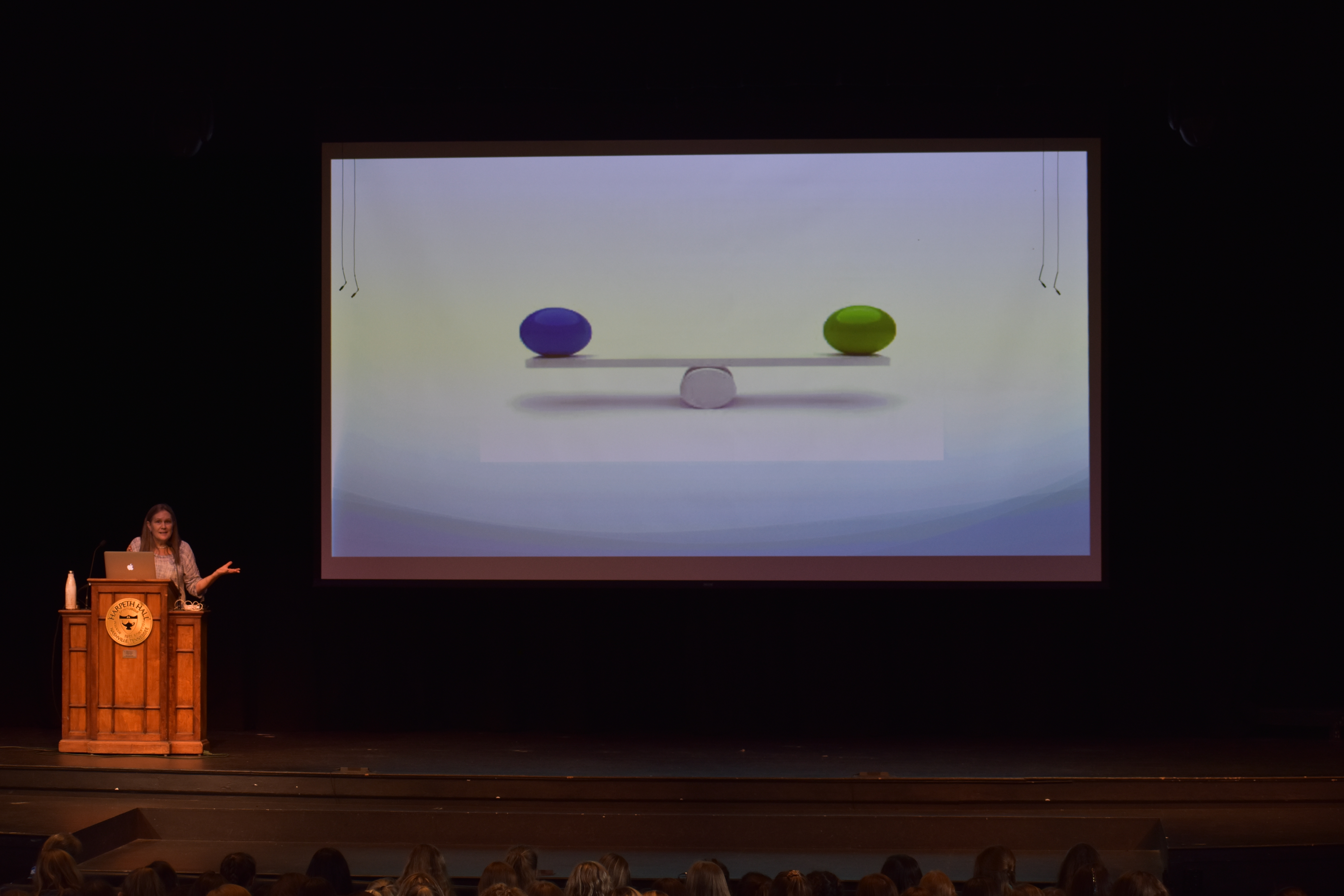 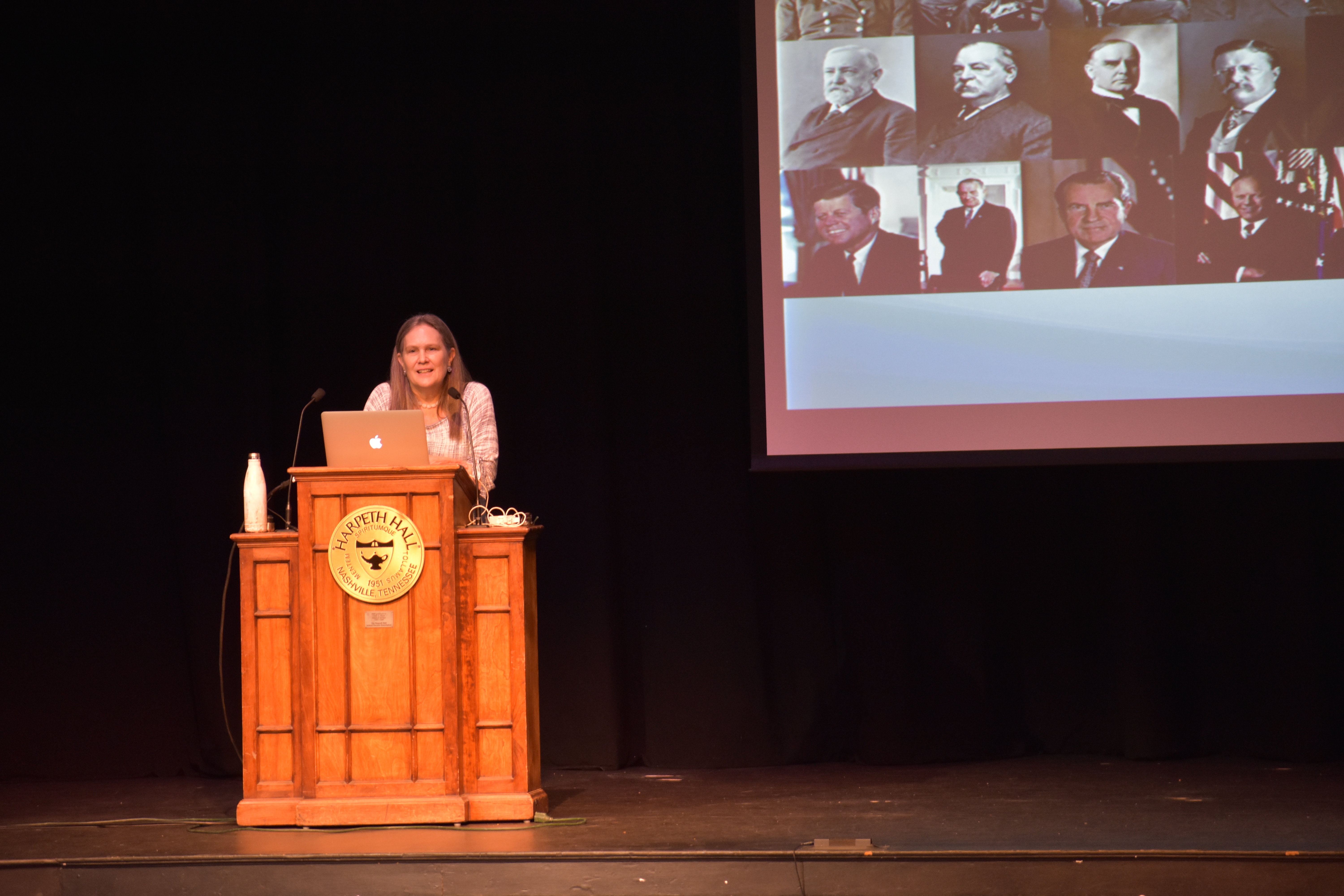 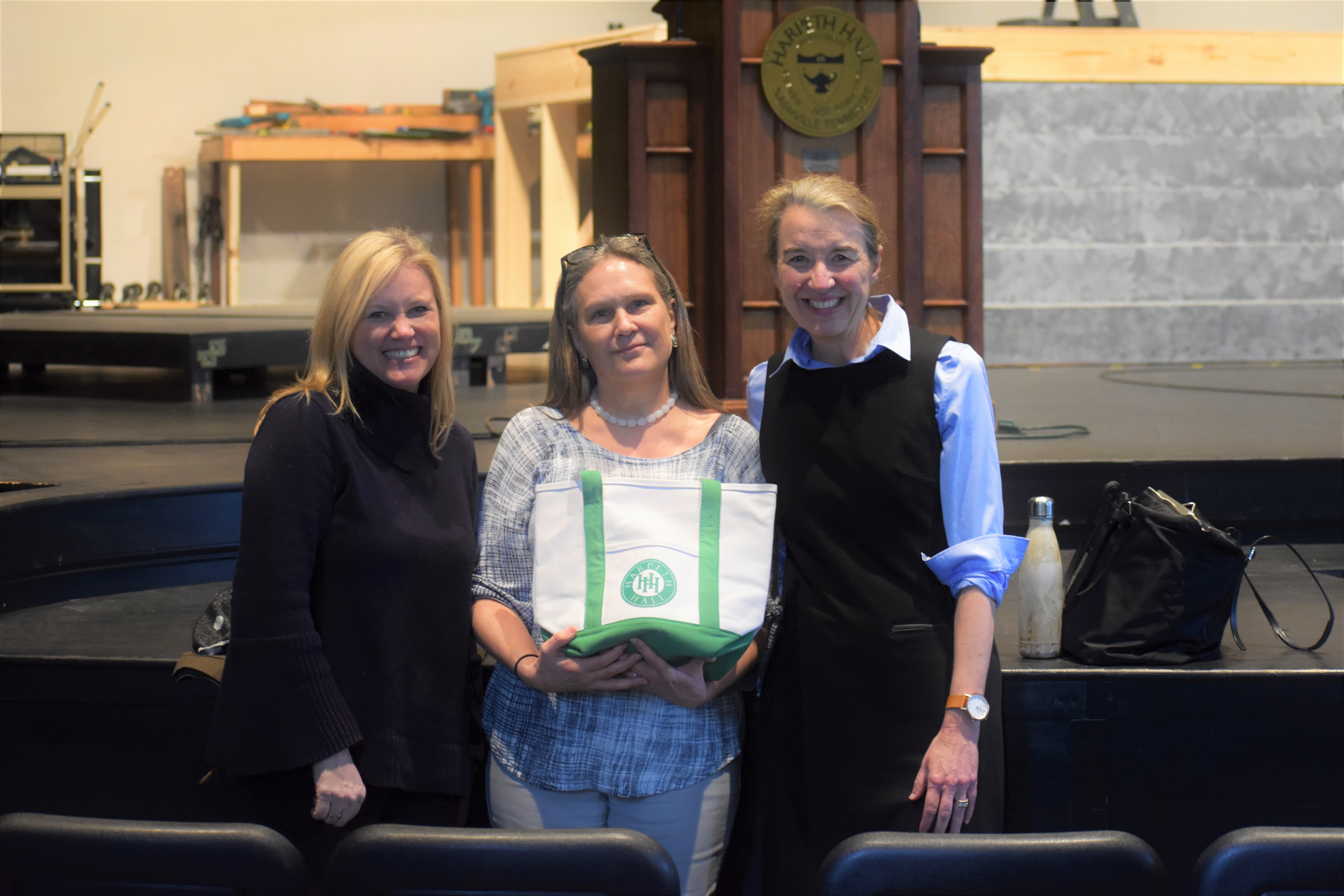