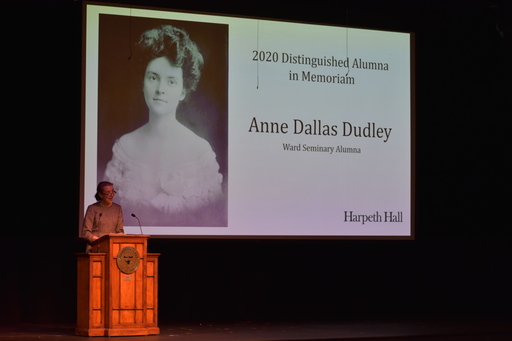 No one could have anticipated the tornado that devastated parts of our community on Tuesday, March 3, 2020. As a school, we are grateful that our buildings and campus were not damaged, but our hearts are with those in the Nashville community who were affected by the tragic event, including several in our Harpeth Hall community.

Long before the events of early Tuesday morning, careful plans had been made at Harpeth Hall to recognize and celebrate an important alumna of our predecessor school, Ward Seminary, named Anne Dallas Dudley. The day, March 3, was selected because it was also Super Tuesday, the United States presidential primary election day when the greatest number of U.S. states hold primary elections and caucuses, including Tennessee. The day is relevant to this alumna because she was a key player in the events that led to securing women's right to vote in the summer of 1920, with Tennessee becoming the 36th and final state to ratify the 19th Amendment to the Constitution of the United States.

As we near the centennial anniversary of the passage of the 19th Amendment, Harpeth Hall students are learning more about the role that our state and our city played in the women's suffrage movement. Each grade level of the Middle School studied the suffrage movement in different ways and presented their work in this special assembly to honor Anne Dallas Dudley as a Distinguished Alumna In Memoriam.

The 5th grade students embarked on a scavenger hunt to learn more about the life of Anne Dallas Dudley and the history of our three schools: Ward Seminary, Ward-Belmont, and Harpeth Hall. Using an app called Goosechase, the girls worked in teams to solve six missions that informed them about Anne's life as a student at Ward Seminary and her work as an activist in the suffrage movement in Nashville.

The 6th grade students are studying the leadership of Anne Dallas Dudley as part of a larger project called "Pushing Boundaries" that identifies ways Dudley and her colleagues were able to overcome obstacles in the ratification of the 19th Amendment. This knowledge serves as a springboard for the students, in the fourth quarter of the school year, to explore challenges faced by female leaders in the ancient world.

To understand the role Nashville played in the ratification of the 19th Amendment, the 7th grade class researched Anne Dallas Dudley's story and key events in our city prior to the vote in the summer of 1920. Students worked together to curate items for a Middle School display case. They also created an impressive online "StoryMap" site that artfully pulls together their research with a sitemap and visuals.

To celebrate the completion of their research projects, the class of 2025 visited the Tennessee State Museum and traveled to the sites in Nashville that they studied, including the State Capitol building, the Hermitage Hotel, and the suffrage statue at Centennial Park.

The 8th grade students researched six prominent figures in the Suffrage Movement that influenced the ratification of the 19th Amendment: Sue White, Carrie Chapman Catt, J. Frankie Pierce, Abby Crawford Milton, Anne Dallas Dudley, and the anti-suffragist Josephine Pearson. Students created a faux museum in the classroom of their social studies teacher, Ms. Eadie. They presented their research on tri-fold boards in "The Eadie Museum of Tennessee History" and included an audio tour for their museum patrons. Each group curated an image and caption for display in the other display case located in the Middle School.

"I am so proud of our Middle School students who have educated us about this inspiring Ward Seminary trailblazer and role model for women of all generations," Head of School Jess Hill said at assembly. "Thank you, girls, for your presentations and thank you Ms. Lucas, Ms. Eadie, and Ms. O'Brien for your guidance."

The Distinguished Alumna Award and was established in 1993 with the purpose of honoring achievement. The official criteria for candidates follows:

Candidates are women who are trailblazers; display extraordinary gifts of leadership and organizational ability; are moving spirits in health, welfare, cultural, or civic affairs; have achieved wide recognition for professional excellence and leadership, serving as an example for other women; have attained unusual success in highly competitive fields; and/or are nationally recognized for vision, skill, and commitment to make things happen. Since the award's inception, thirty-one alumnae have received this high honor.

To celebrate the occasion, Councilwoman Angie Emery Henderson, Harpeth Hall Class of 1991, attended the assembly representing the Metro Council and the Office of Mayor John Cooper to present two official proclamations. The first was the Metro Council proclamation that "recognized the leadership and work of Nashvillian Anne Dallas Dudley and the many women involved in the suffrage movement, and their efforts that led to the freedoms and rights women have today." The proclamation honored Anne Dallas Dudley and celebrated her designation as the 2020 Ward Seminary/Ward-Belmont/Harpeth Hall Distinguished Alumna In Memoriam. It was signed by all twenty women on The Metropolitan Council of Nashville and Davidson County, which represents fifty percent of the 40-member body, affording women co-equal representation in the legislative branch for the first time in the city's history.

The second proclamation was from the Metropolitan Government of Nashville and Davidson County Office of Mayor John Cooper. It noted that "[Anne Dallas Dudley] established the Nashville Equal Suffrage League in 1911, was elected president for the Tennessee Equal Suffrage Association in 1915, and vice president of the National American Woman Suffrage Association (NAWSA) under Carrie Chapman Catt in 1917; and [she] and others led the first suffrage march in the South in 1914 in which 2,000 people marched from the State Capitol to Centennial Park, and where Dudley declared on the Parthenon steps that, 'The right to vote is a matter of simple justice.'"

We are so appreciative to the Metro Council, the Office of the Mayor, and all who participated in making this dedication and recognition of the Distinguished Alumna In Memoriam. It was a great day to celebrate the important impact of our alumnae and the tradition they have set for leading confidently – one that is carried on by our students, faculty, and staff today.

There will also be a feature story on the life of Anne Dallas Dudley in the upcoming Spring 2020 issue of Hallways.