Civic engagement means working to make a difference in the civic life of our communities and developing the combination of knowledge, skills, values, and motivation to make that difference. It means promoting the quality of life in a community, through both political and non-political processes.

For as long as she can remember, Megan Hannon tagged along when her mom went to vote. As a girl, Megan loved getting the “I Voted” sticker and placing it proudly on her shirt. She also liked to click the buttons on the voting machine.

“I always wanted my click to count,” she said.

This year, it will. On November 3, the now 18-year-old Megan will vote for the first time — not with her mom, but for herself. And, in her leadership role at Harpeth Hall, Megan hopes to inspire others to do the same.

As co-presidents of Harpeth Hall’s Women in Government club, Megan and classmate Ava Malnati lead a group of students interested in empowering young women through informed and active civic participation.

The student organization promotes female leadership, focuses on how to have difficult political conversations, and helps young women learn how to work together, despite their differences, to achieve goals that reflect the common good.

Created four years ago, the club has a core group of 10 student officers called the WIG Senate. Club membership ranges between 50 to 60 students who receive emails, attend issue deliberations, and help with events.

The club itself is non-partisan, but members are not expected to be non-partisan individuals. The young women in this club hold true to the idea that it is good for an individual to be passionate about her beliefs and to work toward goals that are in line with those beliefs.

“Students learn that democracy only works when citizens are responsibly and actively engaged,” Women in Government faculty sponsor Bonnie Moses said. “They also learn how important it is to broaden democratic participation and leadership to include more women and more individuals who are currently underrepresented.”

The club promotes civic engagement by publicizing opportunities and events in the community such as internships, volunteer opportunities, and speakers. Women in Government participants hold the annual voter registration drive at Harpeth Hall. During the past three years, they have registered more than 300 new student voters at the school.

Together, club members work to promote informed and productive civic dialogue on the Harpeth Hall campus and sponsor issue deliberations for interested students. All participants must adhere to the Harpeth Hall “Difficult Dialogues” guidelines, which is a set of tools and techniques created by leaders of the school’s Center for Civic Engagement to prepare students to participate in the thoughtful exchange of ideas both inside and outside of the classroom.

“Women In Government allows students to explore political worlds, especially on topics they might not be as aware of, by creating a safe space for open dialogues,” said Sarah Grace Vallejo, who serves as Women in Government’s junior class Senate Representative. “I think this is important, because it allows students to hear a variety of opinions, form their own ideas, and lead others to do the same.

“No one likes to be ignored or feel like their points aren’t being listened to. So I think it is vital to truly listen to the other side. The goal of these discussions should not be to ’win,’ but rather to learn.”

Ringing the bell for women's suffrage

In 2020, the year marking the 100th anniversary of women winning the right to vote, the work of the Women in Government club carries additional meaning. It was Tennessee that, on August 18, 1920, became the 36th, and final, state needed to ratify the 19th Amendment.

On that same date a century later, one Harpeth Hall student from each grade joined Head of School Jess Hill to ring the bell on the center of campus in honor of that victory. Mrs. Hill spoke to the girls about the significance of the women’s suffrage movement. She shared with them that 100 years ago, when bells rang in cities across the nation in celebration of the passage of women’s suffrage, no bells rang in Nashville. This was the opportunity to break that silence.

Mrs. Hill also emphasized that the passage of the 19th Amendment did not mean votes for all. It wouldn’t be until the passage of the Voting Rights Act of 1965, a landmark piece of federal legislation that outlawed racial discrimination in voting practices, that Black women and men would secure the right to vote.

At noon on August 18, 2020, the girls rang Harpeth Hall’s school bell 100 times to honor votes for all women. They joined a chorus that chimed across the city as Nashville celebrated Tennessee’s ratification and the virtual opening of the Nashville Public Library’s Votes for Women room — a project led by Harpeth Hall alumna Jeanie Nelson ’65.

“To me, women’s right to vote symbolizes female empowerment and an increase in women’s rights,” Sarah Grace Vallejo said. “The right to vote was an early catalyst for women demanding equal rights, and having the power to vote is an amazing thing that women have achieved.

“Prior to 1920, voting was deemed a task too difficult for women to handle in the United States, so they were prevented from taking part in such matters. Now, women have had the right to vote for 100 years, which means that women have been able to voice their opinions in elections for a century, all thanks to the brave women who stood up for what they believed in all those years ago. Without those vocal women of the early 20th century, we wouldn’t be where we are today.”

The next generation of changemakers

As an all-girls’ school, Harpeth Hall is committed to developing exceptional new women leaders who will become the changemakers of their generation. For some of the students in Women in Government, that means aspirations of one day running for office at the city, county, state, or national level.

“We need more women in the government, because we deserve to be represented,” said Harpeth Hall senior Janet Briggs, who serves along with Claire Mendes as publicity and communications officers for Harpeth Hall’s Women in Government club. “We make up 51% of the population, but our representation does not reflect that. 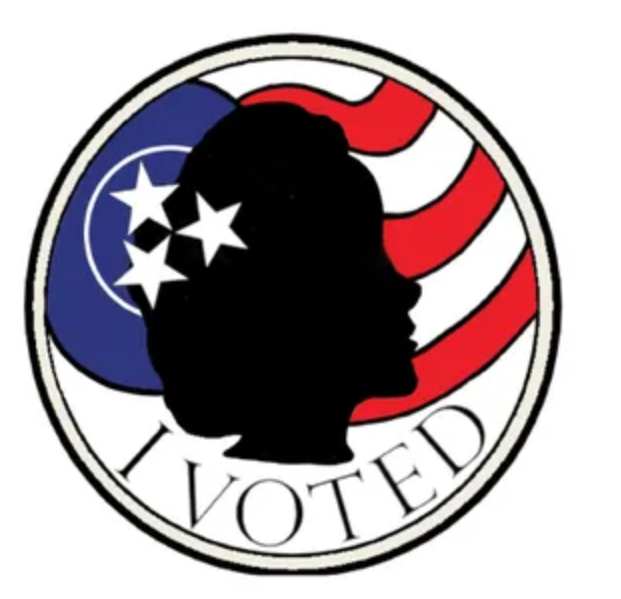 “If the decisions that are being made affect women the same as they affect men, then women should have an equal say in their outcomes. Women in Government aims to educate our girls on how to be more effective citizens and get involved in politics on any level. I hope it inspires girls to at least stay informed and participate as much as they can.”

The upcoming presidential election presents a new opportunity for participation, even for those who cannot vote. The pandemic created an urgent need no one could have anticipated — the need for poll workers at election voting sites.

Across the country, poll workers have typically been older residents who often tend to be more civically engaged than younger generations of voters. This year, however, the threat posed by the coronavirus will cause many veteran poll workers to stay home for health and safety reasons.

That’s where the need arises. Though more citizens may be moved to vote by mail this year to avoid crowding at poll sites during a pandemic, many will still opt to vote in person — and poll workers are essential to that process.

At Harpeth Hall, a group of students signed up to be poll workers on election day, joining young volunteers across the country in the stepping up to fulfill what they see as a civic responsibility. Students interested in working at election polling sites must be at least 16 years old and, if they are 18, they have to be registered to vote. The poll workers positions are paid.

“I think this is a very important civic opportunity, because anyone can do it even if you can’t vote,” Janet Briggs said, “and it shows people who are voting that young people want to be involved. By making this opportunity more accessible for young people, we are showing older generations and other young people watching that it is easy to get involved and that we should all be trying to do our part for the democratic process.”

That drive expands in the classroom. In Democracy and Leadership, a new class this year in the Upper School, students learn to think critically about what it means to be a good citizen  and a good leader in a democracy.

The course provides a civics primer and examines profiles of democratic leadership. It also explores the intellectual underpinnings of democratic government and the role of media literacy and the press through multiple perspectives. The goal of the class is to help students understand how government works and empower young women to be leaders in their local and national community. The course culminates in a student-driven research project during which they identify and propose solutions to a particular social, economic, or political problem.

This semester, the class initiated a project to examine the power that social media wields in the spread of political messages — both factual and unfounded.

“Just because a person has a blue checkmark and is Twitter verified doesn’t mean they are a reliable source,” said Harpeth Hall sophomore Olivia Majors as she and her classmates presented their research on reputable sources for information.

The students would like to better educate their Harpeth Hall classmates and other students across Nashville on how to utilize social media as a “force for good” to get reliable information on politics. To accomplish that goal, the class proposed the creation of an Instagram account forthestudents.bythestudents and an election newsletter for the Harpeth Hall student body.

Through these platforms, members of Democracy and Leadership would create infographics that fact-check information using reputable sources like AllSides (an online service that provides news and media bias ratings), JSTOR (a digital library of academic journals), and the Congressional Research Service. They would provide candidate profiles comparing key issues in easy-to-understand ways, and they would post videos of genuine discussions between students that model healthy political conversations.

They would do it all through the lens of students who — in the complex landscape of politics and life — don’t have it all figured out yet.

“We want to balance legitimacy and youth,” said Lela Hooper, president of the Class of 2021. “We want our audience to know we are teenagers, as well, and we are all learning together.